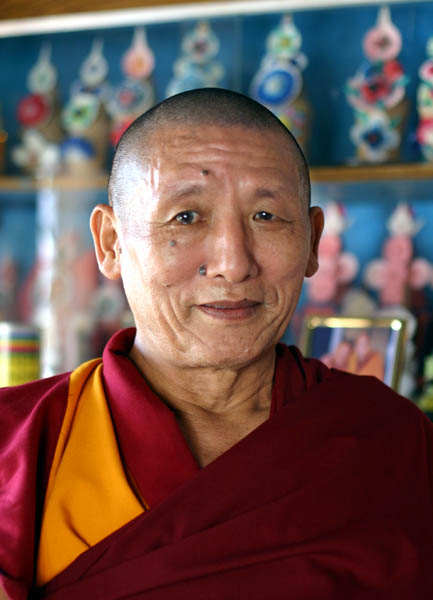 It has been formally announced that Geshe Losang Palden will be the next Abott of Serje Monastery, as appointed by His Holiness the Dalai Lama and Dept of religious Affairs. The appointment ceremony will be held on the 13th of the 2nd Tibetan month, or Wednesday, 23 March 2005.

After numerous requests by senior students Geshe Losang Palden conceted to give an oral transmission with light commentary to Lama Tsongkhapa's commentary to Abhisamayalamkara, The Jewelled Rosary, over several weeks at House 53 meeting hall. More than a hundred students attended.

After the passing away in the start of 2003 of his good friend and colleague of Seraje Monastery, Geshe Thupten Ngawang, of Tibetisches Zentrum in Hamburg, Germany, Geshe Losang Palden agreed to come on a teaching tour to Germany for several months in 2004. He also visited Switzerland for a few weeks in August.

For more details of what he taught see Teachings in Europe 2004.

Return to the Geshe Losang Palden home page.
Last revised: 14 March, 2005
Compiled from oral and written sources, this page is designed and maintained by Sönam Tenzin.
Enquiries, suggestions for improvements, and any comments are welcome: E-mail me!
Dharmakara.net