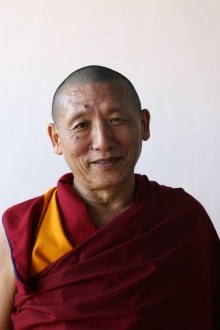 Born in Eastern Tibet in 1936 and named Dorje Samdrub, he enterred the famous Dhargyey Monastery at age seven and began his Tibetan language and Buddhist philosophical studies. After six years and at the advice of his main teacher there, Geshe Jampa Khedrub, he moved to Lhasa in central Tibet and enterred Sera Monastic University. There he met Geshe Ogyen Tseten with whom, among many other great teachers, he studied for about seven years.

In 1959 he fled Tibet as the Communist Chinese army crushed the Tibetan uprising against their rule. He continued his studies at the refugee camp at Buxa in Northeast India until 1967 when he joined the newly formed Institute of Higher Tibetan Studies at Sarnath near Varanasi. There he completed an Acarya degree first grade.

Then he moved to Sera Monastery in exile in South India, where he finished his Geshe degree with highest honours in first grade, and has been teaching an ever growing number of students since then. He is known for his great skills in teaching all Buddhist subjects as well as giving excellent advice for living in this world.

For a more detailed life story, read the Autobiography of Geshe Losang Palden

Contact information and addresses.
Last revised: 14 March, 2005
Translated and compiled from oral and written sources, this website (dharmakara.net/palden) is designed and maintained by Sönam Tenzin.
Enquiries, suggestions for improvements, and any comments are welcome: E-mail me!
Dharmakara.net